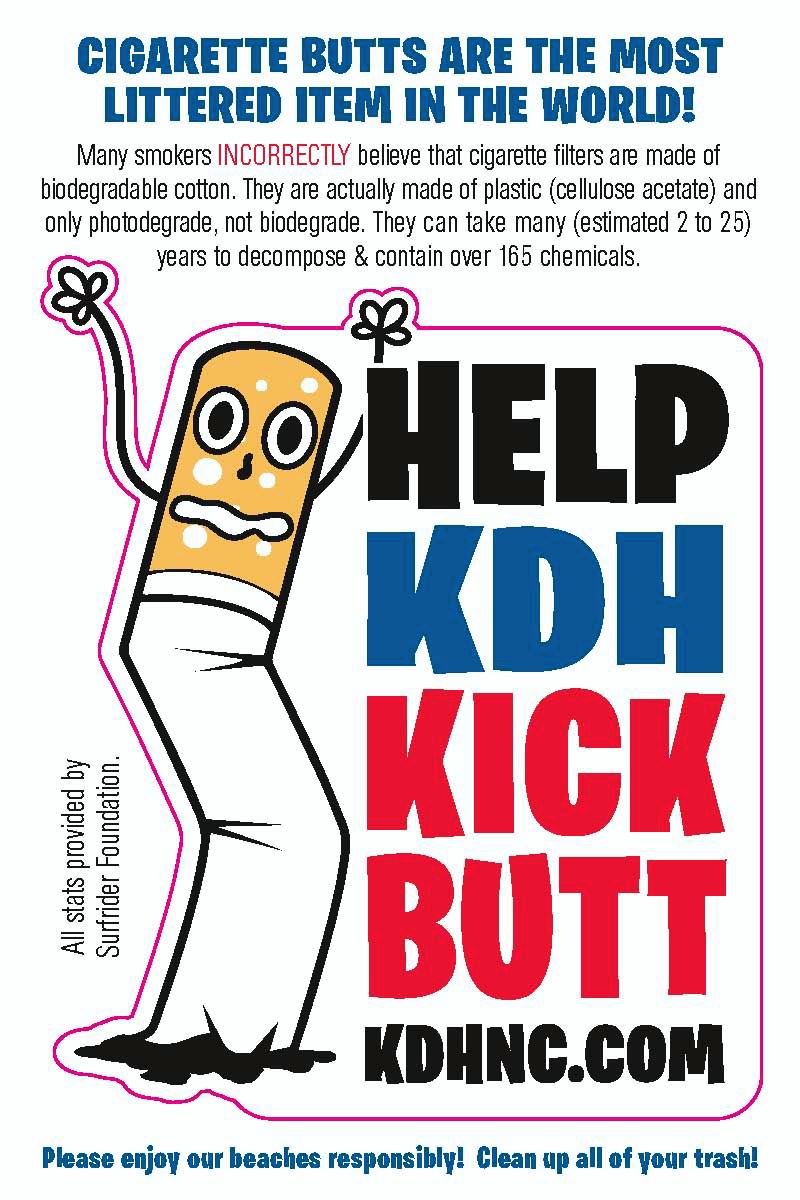 Kill Devil Hills has been taking initiative to decrease the amount of cigarette butt litter throughout our community. Please do your part to keep our community clean by properly disposing of all smoking materials.

The next meeting of the Kill Devil Hills Kick [Cigarette] Butt(s) Committee will be on Thursday, November 7, 2019 at 6:00 p.m. The group meets in the Meeting Room at the Administration Building, 102 Town Hall Drive, off Colington Road.  All interested persons are welcomed.

The Town has teamed up with Surfrider Foundation, Outer Banks Chapter to help kick cigarette butts off the beach with these new receptacles at all KDH beach accesses! 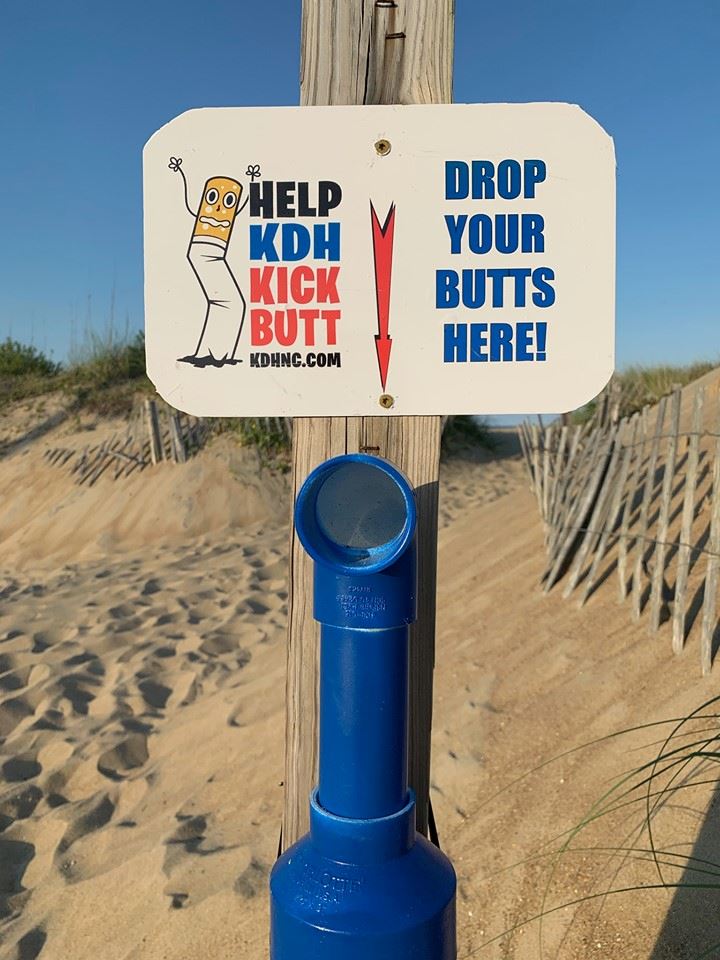 Karen Catbird photographed a black skimmer feeding a chick a cigarette butt at St. Petersburg Beach, Florida. Although this did not occur in Kill Devil Hills, the images provide powerful examples on why it is critical to properly dispose of smoking materials. The Town of Kill Devil Hills has provided cigarette butt receptacles at all KDH beach accesses. The Town also has personal portable ash trays available to assist smokers with tools to help eliminate cigarette butt litter from our community. 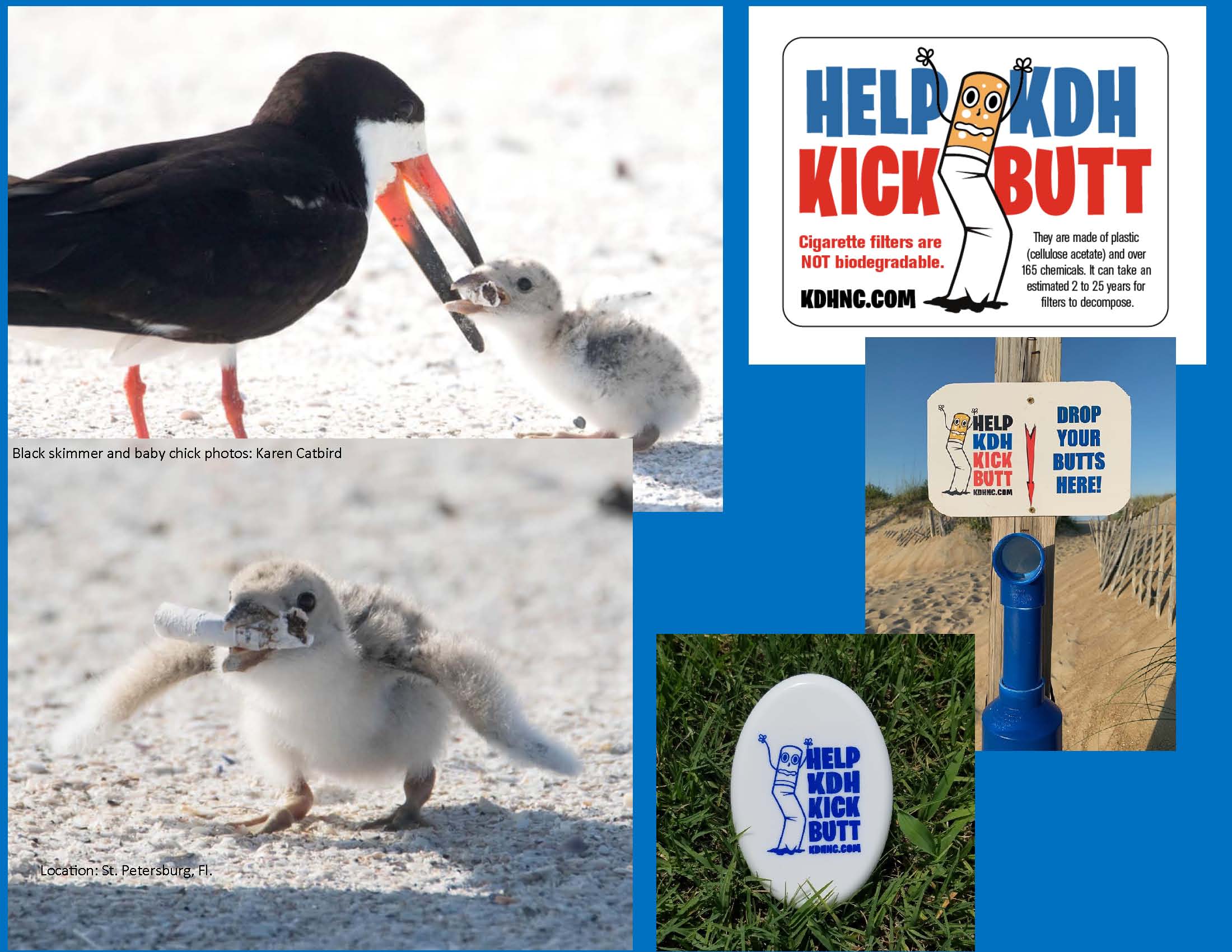 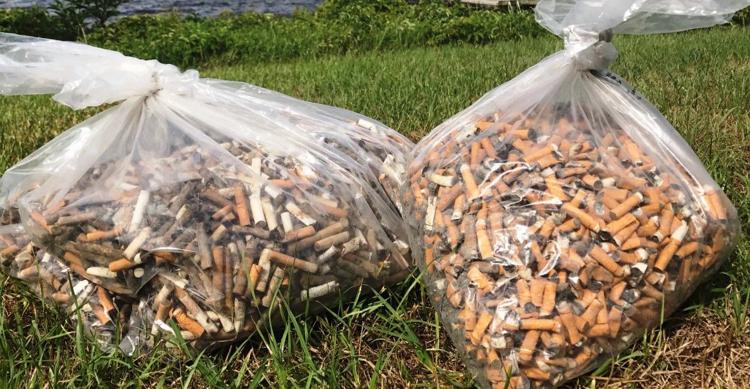 A team with the North Carolina Aquarium on Roanoke Island collected more than 10 thousand cigarette butts over about a year and a half.

Cigarette butts are the latest nemesis of towns and groups ambitious to keep beaches, oceans and waterways clear of harmful trash.

Kill Devil Hills has started a "Kick Butt" campaign, placing disposal containers at all 19 beach access areas and at Avalon Pier. Volunteers pass out pocket-sized butt holders by the hundreds and stickers adorned with a wide-eyed, attention-getting cartoon cigarette.

The Surfrider Foundation of the Outer Banks has helped with the effort.

A team with the North Carolina Aquarium on Roanoke Island collected 10,900 cigarette butts from the grounds, beaches and dispensers over about a year and a half, said aquarium spokeswoman Chelsea Miller.

"It's tough," she said. "Most of what we pick up is cigarette butts. They pile up during tourist season. They're not thinking about the impacts."

The war on cigarette butts goes beyond the Outer Banks. Every year, the Ocean Conservancy has sponsored a worldwide trash cleanup that includes hundreds of nations and thousands of volunteers.

The cleaners picked up 2.4 million cigarette butts, the number one item found in the 2017 cleanup, according to a report by the group.

Smokers toss them aside thinking they are biodegradable and will shortly disappear, said Sue Kelly, who is the cleanup campaign leader with Painter. Instead the stubs are made from cellulose-acetate, a plastic that can take up to a decade to degrade. The remains contain 165 chemicals that can be harmful to wildlife, she said.

The group plans to continue education and cleanup efforts during the year.

"It's an ongoing process," Kelly said.


For a direct link to the article, click here