The Little Red Mailbox - Glenmere Beach Access
approximately Milepost 8 on Virginia Dare Trail
You're invited to post your own message at this neat little nook where so many leave thoughtful messages of hope, encouragement and good cheer.

As you climb the wooden steps of the Glenmere public beach access in Kill Devil Hills, something will catch your eye before you even see the ocean. And it will likely make you drop everything – including your beach chairs – and spend a few minutes contemplating something we all need in our lives.

And there is no better place to ponder that than by the sea.

Set on a piling to the left of the gazebo is a rustic, weathered red mailbox and on its door is a message…Leave a Note of Hope.

Inside this little red mailbox is a bound journal and two pens – an invitation to anyone who wants to share their thoughts. 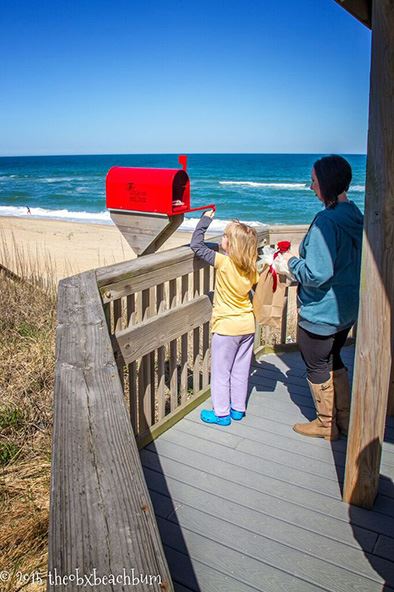 The mailbox was placed in mid-July on what Sue Goodrich considers her sacred piece of earth next to the sea. The Kill Devil Hills resident made this mailbox of hope after receiving a few nudges from the universe, and in a few short weeks the journal has been used for everything from spreading hope to seeking it and all things in between. “Dear Hope,” Goodrich writes on the first page, “The angels listen softly to your heart and carry your hope on their wings.” It’s her call to anyone who passes by to share their stories and messages of hope. Look in your heart and write. That’s what Goodrich is hoping for. “Every summer has a story,” another note reads, “write yours down at #littleredmailbox.”
With a Facebook page and Instagram account, the mailbox is gaining popularity and easily has gathered a hundred entries in a few short weeks. The Glenmere beach access has always been a peaceful place for Goodrich since her husband, Eddie, donated the gazebo and other improvements to the town in 2004. It became even more special after her mother died suddenly. After her early morning workouts with Outer Banks Boot Camp, she goes to gazebo to watch the sun rise and have a cup of coffee and think. It was a period of her life when she needed a little hope. The idea of such a mailbox had always been in the back of her mind. Then on a July morning after leaving Glenmere and seeing a photo on OBX Beach Bum Photography’s Facebook page of her beloved access, everything fell into place. With the help of photographer Roy Edlund, who nudged her to record the mailbox’s story in photographs, along with Vicki Horning, who painted the mailbox and gave it its rustic look, and a very supportive town government, Goodrich got the mailbox up within weeks.  Two girls write entries in The Little Red Mailbox journal. “I didn’t even have to go before commissioners to get approval for this,” she says. “This is a town of hope.” Horning, owner of Whim Home Décor & Jewelry, even put some dings in the mailbox “to make it look like life had come at it.” Goodrich says the mailbox was created as a refuge to escape the everyday hustle and bustle and arrive in a place of peace by the sea. “It’s a place to share your thoughts, dreams, feelings or secrets or to just visit what others have left along their journey,” she says. “Everybody needs a little hope, and helping others also helps ourselves.” The universe, she says, wanted this to happen and found a way.
The entries range from messages of hope, to thoughts on the ocean and feelings of peace.

“May you be as happy everywhere as you are right here. This is one of the most peaceful and pleasant places on this earth,” one entry reads. Another says, “Second star on the right and straight on until dawn, hope is closer than we think.”

One signed Pray for Peace and Free Gaza reads, “My hope is for us all to see the difference in skin color as shades of beauty, not characteristics to separate us.”

Others may be simpler, but are meaningful.

“Always keep a seashell in your pocket.”

“Hello, I hope you have the best day in your life.”

“I hope that one day everyone can live in a world of peace.”

“If life gives limes, rearrange the letters and it gives smiles.” 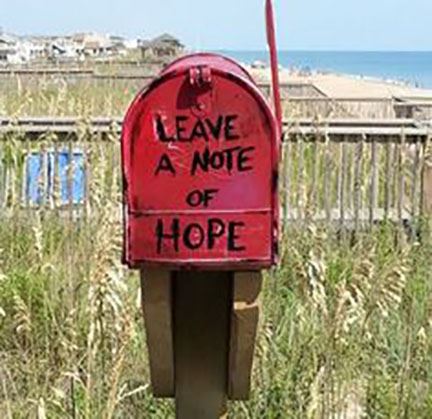 Goodrich says her guiding lights through the venture are her mom, who passed away suddenly, and Outer Banks Boot Camp. She wore a strength necklace of her mom, made by Horning, and her bootcampT-shirt during the mailbox raising. On the back of the necklace it reads, “There is never an end to the sea.” She hopes to soon get a physical address where people can mail in their messages. While some initially voiced concern over vandalism, so far visitors to the mailbox have treated it and the journal with care. “The angels are guarding it,” says Goodrich, who at a time when she needed hope in her life was able to offer others the same. “Like my Mom always said, ‘Reach out to others when you feel sad. It’s amazing how much better you will feel.’ She was right.”